Will it all start again on Monday? 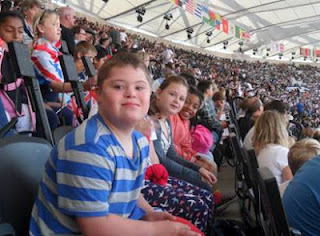 Thanks go out to Stephen Adams at the Daily Telegraph. He (quite rightly) took a broadside from a mother about his use of language when describing our children, especially in relation to pregnancy testing. Stephen's reply is so good and so thought-through, that I think he would have done it any time, not just because of what's going on in East London.

But isn't it interesting about how everyone's being very well behaved during the Paralympics? Even Jimmy Carr, well known for punchlines such as "**** off, you retard" has been on the Last Leg show on Channel 4, desperately trying to claw some credibility with his new-found disability credentials. He didn't need to say he's ashamed of himself. I saw him being ashamed of himself.

So, my big question is: Are these people just biding their time and it'll all start up again after the closing ceremony on Sunday? People being lazy, cruel or unhelpful about our children. But let's hope that one Paralympic legacy is that the nation remembers how disabled people, including those with a learning disability, made us all feel proud. And not from a patronising sort-of-way; but from a "time for Murderball Rugby, do you want some?" sort-of-way.

Devine, Weir, Storey, Simmonds. The names trip off the tongue and a few days ago no one had heard of them.


And here's Stan at the Paralympics on Monday. He saw the Weir-wolf pick up his second gold. History in the making.
at September 06, 2012