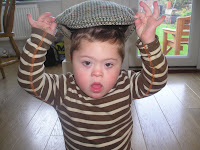 Stan had a bad start back to school: He smacked his key worker in the face and came home with that look of: “What are YOU going to do about it”. His behaviour was challenging for all concerned, and it was worrying because we thought he’d suddenly become wild child. It turns out that Christmas and New Year had completely taken him out of his routine. Also there are lots of new kids in the nursery, and he was just staking his territory. A bad time to choose to act up, really, as the Ofsted inspectors were in town. We were frantic: Luckily, they went to the nursery later in the week, and my wife saw Stan on Thursday, leading an inspector by the hand, to sit down and sing a song. Hopefully they saw a great example of mainstream integration, rather than the beast that he’d become over Christmas. Look at his picture: Butter wouldn't melt in his mouth…..Stan does do a good line in smashing you in the face with a heavy plastic object, especially when he wakes up, runs in the room, and you don’t quite make it to consciousness. I’m sporting a bruise currently! He also stuck an ice-cream cone on my head recently which was like a devil’s horn. I can laugh about it…now. Behaviour is such an important issue, but, like everything else, we take each day as it comes and eventually he will learn it. It’s hard work and often soul-destroying. By the way, at the weekend, Stan caught a ball for the first time, used the mouse on the computer properly for the first time, and signed his first sentence. Quite often, acts of bad behaviour are followed by great moments of progress, leaving the parent in a state of confusion………..
at January 16, 2006