Down's with the kids - The book / Audiobook / The podcast

Listen to the podcast on Spotify

Down's Dad's pandemic blogs - Two hosted by the Local Government Information Unit and one by The Ideas Alliance:

12 May 2020: Staying up late is put on hold. Autism and learning disability during lockdown >>>

Advice from the National Autistic Society

Questions and answers: From various USA Down Syndrome groups

The hand-washing rap from the Purple All Stars 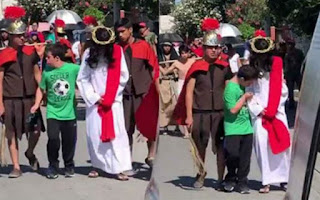 The Pope is groovy. Religion and Down's Syndrome

Religious leaders seem to be falling over themselves to be relaxed and groovy about Down's Syndrome. First you had the General Synod discussing testing in pregnancy. It backed a motion calling on the government to ensure that parents who have been told their unborn child has Down’s syndrome will be given 'comprehensive, unbiased information' regarding the condition.

I was asked to comment on all of this and did so on Radio 5 Live. And then, the following Saturday, Reverend Rob Marshall went on Radio 4's Thought for the Day and talked about my 5 Live interview. My main point was that, on top of the Church of England's suggestion that people get good information when they have a diagnosis, why not come and meet Stan or someone else with Down's Syndrome. 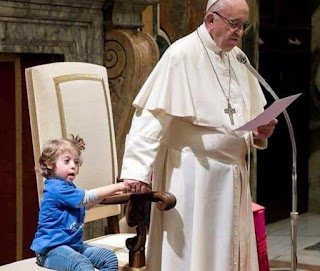 And then the Pope got Down's with the kids. A girl with Down's got up during a regular papal service and went towards the Pontiff. Security men quickly moved in to take her back to her Mum. The Pope stopped them and told her to sit next to him. She did just that and Pope Francis continued his homily, holding her hands.

It's reassuring to hear this mood music from religious figures. And it's not just about the - at-times - tired old debate about pro-choice / pro-life that the church is so often associated with. All of this is, hopefully, pro-information and also showing positive images of Down's Syndrome - and I'm comfortable with that.
at February 19, 2018 No comments:

Haircut time: known to the community

'Oh my days. Are you Stanley? I haven't seen you in years'

Stan and I were walking back home from the barber shop. A woman was berating a group of school pupils for playing football on the street. But as we arrived it all changed; one of them recognised Stan from primary school days. And we all had a lovely chat. 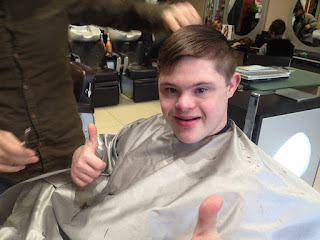 Stan had just been for a haircut, where everyone knows him. We'd been on the bus, where no one knew him but by the end of the ride, two men in their early twenties were his best friends.

And it struck me that Stan is well known in the community. I'm often approached in the supermarket by someone who was Stan's supporter for, say, a week, a few years ago. He can leave an impression with so many people.

But it's his former primary school friend that I'm thinking about today. At that school everyone was encouraged to learn Makaton signing and everyone just knew Stanley. Other young people might not know how to react when they meet someone with a learning disability. That lad did. Because Stan had been a normal part of his primary education.

And I like to think that Stan teaches lots of people in our community lots of things about tolerance, understanding and the joy of life, every single day.
at February 08, 2018 No comments: