My own small battle of the sexes

My own small battle of the sexes “I cried for about a year.” “Same here, well, for at least the first nine months.” Why are women so honest? These comments were made by my wife and a friend at a Christmas party at a family centre today, talking about when our DS kids were born. Whereas blokes kind of “cope”. For me, when Stan was born it became a bit of a “challenge” and I still sometimes treat it like some big blokey experiment (a long term one!). I mention this because I was recently interviewed by the Foundation for People with Learning Difficulties, who are researching the role of fathers of children with learning difficulties There is a suggestion that support for parents is often targeted at mothers and that fathers may find it difficult to ask for help.

I found the interview rewarding as I’d never spoken of my feelings before to a stranger, for an hour and half….It was like therapy! But I won’t burden you here with what I said. (Typical bloke!)Certainly, most of Stanley’s key workers are women. That’s fine, he loves them. But he really loves the guy who’s his hearing-impaired teacher, because he’s a bloke. Stan runs up to men and hugs them and stays hugging them. Women may turn out to be teachers or nurses and may get him to do boring stuff. And so I worry that there isn’t the input for men that there could be. Some men will find it difficult to cope when their child is born with a learning difficulty. Danny Mardell, who I wrote about recently, admitted that he took solace in work at first. A lot of the decisions in Stan’s life are made by women and that’s fine because they are fine people. But, when he’s older, I’d like Stan to have a male role-model that isn’t just me, his brother or his uncle.
at December 21, 2005 3 comments:

OK, that'sit for 2005. The Wizard of Ouch has taken off his conical hat, put on his Santa hat, and given me Xmas off. Before I say farewell for the year, here's a snippet, as promised of a play written by Stan's eight-year-old neice, Eve, and to be performed on Xmas Eve (in our house). Now, it's important to make everything in Stan's life age-appropriate, but he is playing the part of the Down's Syndrome Baby Jesus because he is the closest in age to the real thing and well..........................it's only a play! Merry Chromosome! SCENE 1:THE LITTLE TOWN OF SHETLEHEM , SCOTLAND . Joseph: oh I hope I don't get a disabled child Mary: oh what was that dear? Joseph: oh nothing darling Mary: oh I'm giving birth in 5 minutes so bring me a cup of tea lad……… oh forget the tea I'm giving birth now!!!!!!!!!!!!!!!!!!! Joseph: oh I'll come when the baby's here Mary: oh your useless I'll just call a nice sensitive animal……oh Rudolph dear Rudolph: oh you silly moo I'm not the giving birth service, but what I can tell you is that we might need to go to the Giving Birth Planet because your son might need some medical help. Climb aboard!!!!!!!! (whooshing……..) Read the whole play http://www.evecornflake.blogspot.com/ Merry Xmas to all Ouch readers from Stan and family. 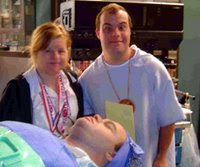 Blair plays Tommie Bolton, a young man, who goes to the doctors asking to look like his family. He tells them everyone else gets to look like the people they love, so why shouldn’t he? He says it isn’t his fault that he has Down syndrome. The new doctor in the series discourages the family, telling them that it would take $60,000 and 10 surgeries to do such a thing. Tommie's parents don't have enough money and ask if they do "pro-bono" or free work for deserving cases. The new doctor says that it's the same scenario as if a woman wants a boob job.However, Dr Troy is more sympathetic, feeling that the new doctor wasn't very helpful. Tommie's arrival spurs him into contacting his mother again because Tommie's family bonds are so strong.Tommie's brother and sister approach Dr Troy, and offer $15,000, asking him what he can do for them.Dr Troy suggests that, as the family all have the same prominent nose, Tommie should have a new "Bolton nose". Tommie goes under the knife and gets a new nose. He loves the outcome, and says: "Oh my God, I look like my Dad". His family are delighted with the new nose too.
at December 01, 2005 No comments: