Not in a huff: Down's Syndrome awareness week

We're really pleased with the filming and editing that the Huffington Post have done. They've made a film about Stan; they filmed him and other members of the cheerleading group at Saracens rugby club. It was released today to coincide with World Down Syndrome Day and Down's Syndrome Awareness Week. 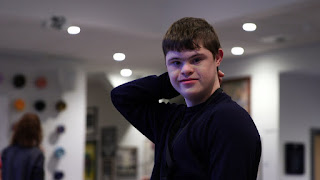 The film-makers were careful to use words that didn't offend or patronise, like 'suffering from' Down's etc. But also the film gives a good indication, we hope of life with Stan. It can be a challenge, but it's as busy as the cheerleading session.
at March 21, 2017 No comments:

"It's OK to say 'retarded'" says comedian Louis CK. And then he makes his big mistake...

Some comedians use the term ‘retarded’ and they’re currently headlocked in a battle with the R Word campaign. The latter don’t want people to use the word. But comic Louis CK says that it’s OK to employ it. He justifies it in a YouTube video - and I have to warn you that even if you’re not easily offended, this is a tough listen. (Warning: Offensive swearing)

You hear a recording of a young man with learning difficulties, who says he's upset about hearing the R Word. Louis CK responds: “I doubt that he was offended by the word. I think that somebody told him to say it.”

Is this a persuasive argument? The older I get the less I want to see the world as 'prescriptive' - and so not everyone has to be offended by the R Word, just because someone tells them to. And Louis CK makes a case for saying that the word has been hijacked by the families and carers of people with learning disabilities. He says that people don’t mean to offend those with learning difficulties when they use ‘retard’.

Some people don’t have the capacity to understand. But many do. And so it's offensive to those people with learning difficulties who are genuinely troubled by the use of the R Word; because they’ve worked out for themselves what they believe is and isn't offensive.

For balance; here’s the R Word’s side of the argument.

I appreciate that Louis CK's at least tried to justify himself. But I care less about his use of the R Word than his lazy assumption that it won't offend people because everyone with intellectual disabilities is the same; ie unable to have a view on this subject.

When is society going to realise that people with learning disabilities have opinions, thoughts, aspirations, hopes and yes, feelings?
at March 09, 2017 No comments: