At the time of writing I'm looking at the picture of a baby born the other day - the baby has Down's Syndrome. I belong to a Facebook group for parents who have children with Down's.

And a woman joined the group during her pregnancy. She's now a Down's mum having given birth to a gorgeous bundle of joy. The mum's been deluged with good luck messages and affirmations of the type you get when a typically-developing child has been born.

It was different when Stan was born, pre-social-media. I said in my book that Stan's arrival drew in many less flowers than when his older brother was born. The whole thing was thoroughly depressing. I'm sure many people said that Stan was lovely but we didn't have access to a community that really meant it.

How would it have been for us if social media had been around when Stan was born and when he had heart surgery? The other day a parent posted that their child was in hospital having a similar operation to the one Stan had in 2002. As this child was small and poorly, just as Stan was, I posted the photo above, encouraging her to have faith because they can all grow up. I hope it helped.

But for us, when Stan was born we were given a VHS tape from the 1980s depicting girls with Down's wearing inappropriately frilly dresses. Yuk. And we had no social media to draw encouragement from.

I'm just glad that new babies are being welcomed into the world in a way that all babies should be. And I'm sure it helps the family no end.
at December 03, 2016 No comments:

One for the dads

I've stumbled over an audio recording I made exactly ten years ago in November 2006. I interviewed fellow fathers about being the dad to a child with a learning disability. It never went to air...until now. As one dad says: "My son's special because he's a wonderful kid not because of the technical term."

Steve talks about this on his latest podcast

I made the recording at the launch of a report by the Foundation for People with Learning Disabilities – Recognising Fathers.  It discovered that some dads weren't given time off work for hospital appointments, some health staff ignored the dad – spoke through him, if you like - and talked only to the Mum - and the report alluded to a sense of desperation amongst some dads about how powerless and unsupported they felt. My testimony was included in the project.

When you have a child with a learning disability – and as that child grows up it can be hard for the parents to cope. As far as men go the 2006 Recognising Fathers report was, I think, really important, because it identified that some dads do really struggle. I hope that men recognise that they’re not alone.

Stan in the media

5 October 2016 - The Sun - Talking about the Sally Phillips documentary

29 January 2013 - Letter to the Evening Standard about the Undateables

28 October 2009 - Letter to Independent about The Specials

I found my place in the Sun

I was a bit nervous buying the newspaper. I was pretty sure that Stan and I would be in there but newspapers can sometimes 'drop' items if bigger news comes along. So I got a copy of the Sun and our story was featured. (Printed edition below). 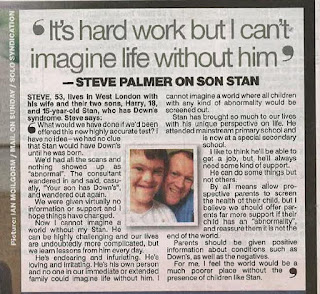 The kerfuffle was started by actress Sally Phillips who asked on a BBC2 documentary: What would a world without Down's Syndrome look like?

Steve talks about this on his latest podcast

I found it fascinating, not just because of the stuff about Down's Syndrome. But Sally goes on to look at geneticism generally and how we're on the verge of being able to choose kids who aren't disabled, aren't ginger and are good at maths. It's just that kids with Down's on in the vanguard. You can't tell if someone in the womb will go on to have an autistic spectrum condition...just yet. But perhaps soon you will be able to and that raises divisive ethical questions.

When the Sun contacted me I saw it as a good opportunity to spread the word about Down's Syndrome. As a parent, it can be hard work but it can also be rewarding.

Stan watched much of the documentary with us. He was interested to see other people with Down's on TV. And Sally's love of Olly, and her passion about the issue, made for a really good show. I wish there had been more on geneticism more widely. But it was a good effort and it certainly got people talking.

Panic in the Tesco? Not really...

I was running up and down the aisles of the massive superstore - running but not panicking. I'd got the Tesco security guards to cover the entrance; I'd got the help desk to put all staff on alert. Stan had slipped away from me. He wasn't exactly missing - but he was definitely absent. 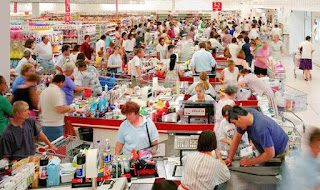 The good thing about not panicking is that you get to think straight. You swing a plan of action into being and you think about what you're doing. So it suddenly dawned on me that Stan likes to go to the Costa outlet which is situated at the back of the store. And there he was in the coffee shop, having pilfered a strawberry smoothie. Quite a relief but why am I so pleased with myself about this? The answer is that I did all the things I was supposed to do.

Of course, like in Peter Pan, all this has happened before and all of it will happen again. A couple of weeks ago Stan took off and the police found him. His brother reckons that, at almost 15, Stan has hormones raging through him and that when you find it difficult to express yourself, it's perhaps easier to take the path of least resistance; ie bugger off.

But, despite the fact that I lost my son with Down's and it was worrying, I'm celebrating a small victory. I actually nailed it by acting calmly. And then I took Stan around the store, getting him to apologise to various members of staff who had helped us. My advice to parents / carers in a similar position? Have a plan. Panic by all means. But the plan will help you to centre your thoughts.
at September 09, 2016 No comments:

In my book in 2014 I wrote that we'd never go on holiday with Stan again. Our last trip as a family was the dreadful holiday of 2013. But something amazing's just happened and I'm writing this because if you feel like giving up - when your child with Down's is trying your patience - I'm here to tell you that it might get better. Back during the horror holiday three years ago, I suggested that if you're going on holiday with your child who has a learning disability, then remember to pack patience and I don’t mean the card game. You could be returning with emotional baggage.


There are two reasons why I think that 2016 was a good year. One: Stan has grown up a bit. At 14 and a half we can reason with him. The place we just stayed in Portugal - if it had been three years ago, Stan would have smashed all the wine glasses. Now, he wasn't bothered. He was happier doing his own thing. Two: Arrangements. He had priority boarding to the gate and passport control, no waiting anywhere and that helped keep things calm. And he had access to his brother and cousin. In 2013, we were staying in a different place to his cousins. He hated that.

So, we're bathing in the glow of a successful trip. Stan even danced in the square with a band. He wasn't perfect but we had a holiday. In 2014, I predicted that we would never have one with him again. So it's a great feeling.
at August 19, 2016 No comments:

Around 1993 I started listening to Garth Brooks's music. I even dragged Down's mum along to see the country singer at Wembley Arena. And just now, because Garth's not on Spotify, I was having a trip down memory lane via YouTube and I found this. I nearly fainted:

Garth Brooks: Standing outside the fire (1993)

Starring in this video is a young man with Down's Syndrome - Brandon - who takes part in a High School race. Now, these days, with social media, we're quite used to seeing people with Down's doing extraordinary (and ordinary - see previous blog) things. But how extraordinary was it to see someone with Down's starring in a popular music video in 1993?

However, Brandon, encouraged by his mum, spurns the Special Olympics to take part in the 'regular' race. His dad argues with the mum because he wants to protect Brandon from humiliation. The mum wants to push Brandon on so that he's not 'standing outside the fire', in the world according to Garth.

If that scene was in a music video in 2016 I wonder if there'd be an uproar. You see, the Special Olympics, 23 years on, has so much more status these days. It's not something that anyone should be ashamed of taking part in. Perhaps in the 90s it was seen as second best. Not any longer.

But it's still amazing to come across this video. It's the first time I've ever seen it so, here in 2016, to look at this man 'standing outside the fire', and starring in Garth's video, has been fantastic.