Stan's not going to Glastonbury...just yet

I want Stan to mud-dive, stay up all night and have the odd beer.

I want him to go to Glastonbury or any other music festival.

But, you know: he's only 13. His brother's first festival was Reading when he was 15, and he's typically-developing and even then I had to chaperone. But one day...

It'll be 'cometh the year, cometh the Stan'. He'll probably be there with me, providing support - Down's mum doesn't do festivals. She's very civilised and sensible.

But what about people with learning disabilities that want to rock out, or in the words of The Happy Mondays's Shaun Ryder: 'Reach for the stars, brave ravers.'


I do hope that my friend (pictured) Paul Richards is being really silly at Glasto, because his message is dead serious. Paul is the organiser of two great music initiatives: 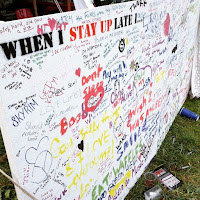 Here's to a day (soon hopefully) which sees Stan rolling around in the mud at a festival...and no one bats an eyelid. (Well, his mum will be furious).
at June 25, 2015 1 comment: