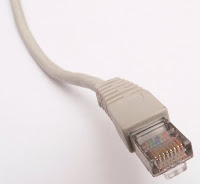 So I was walking down the road, thinking: “I bet they've cocked it up. I BET BT have not installed Infinity properly.” And as I arrived home, I found out that my prediction came true. It turns out that our phone line is now dead and the computer developed a fault so we can’t access it wirelessly. You can plug a wire in, but that’s not suitable to modern family life. And I lost it. I felt terrible about abusing six different members of BT staff on the phone (on the mobile - remember, the land line is OUT). When I’d calmed down and apologised to the family I felt myself saying: “You’ve got this out of perspective; there’s a famine in Africa, a phone-hacking scandal threatening the establishment, and that damp patch on the wall isn’t going to mend itself”. It was no good though; I still felt in a rage about it.
Then I realised what it was: I wanted everything to be perfect. Perfect fast speed, perfect unlimited broadband, especially as Stan likes to go online a lot and the internet is a brilliant tool for him. Then I thought that perhaps it’s OK to sit there with a wire plugged in the back. Doesn’t that just sum up our lives? We have a computer with a wire coming out of the back, when everyone else seems to be wireless. And I actually quite like that. We're surrounded by imperfections. This morning, Stan ate a packet of small sausages and didn't feel the need to apologise. Yet a few minutes later he pointed to the wifi to see if it was working yet. So he's a thief - and a computer genius. Life in our house is imperfect, with a wire sticking out of the back.
There’s been controversy in the USA about someone describing Boston as a city that “suffers from a kind of Style Down Syndrome, where a little extra ends up ruining everything”. And there’s been strong responses, including this great one. But I’m not too offended (alright, I am offended by the second half; the “ruining” bit). But what if Boston had an extra chromosome and it was all the better for it? We should embrace non-perfection.
Thanks. I feel so much better.
at July 20, 2011