We need to talk about Ricky 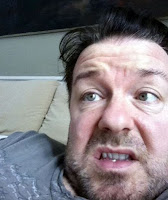 In the mid 1990s I tried my hand at stand up comedy. I was pretty awful but there was the odd gig where I did OK. So who am I to criticise comedians? Well, let's compare Frankie Boyle and Ricky Gervais. The former seems to be downright offensive - he just said that our kids all die early and have pudding-bowl haircuts. He never responds to requests to discuss his comments, including Jordan's regarding her son Harvey.
But Ricky is happy to get involved. He did it last year when he called Susan Boyle (no relation to Frankie) "a mong" - but then justified his comments. But for some reason, his latest use of the word, a couple of weeks ago, on twitter, caused much more interest from the press. Ricky says:
'The word mong means Down’s Syndrome about as much as the word gay means happy. I never use the word mong to mean anything to do with Down's Syndrome.' Read more here
There's a fascinating article about Gerry Sadowitz, who has been known to offend even the most open-minded of his audience. But he makes the point that comedy needs to be thought-provoking. He says of Frankie Boyle: "He'll write a joke, or someone will write it and give it to him, and he'll do it without any thought."

But is it good enough to say that Ricky's more off-the-hook than Frankie Boyle, just because he's prepared to talk about it? I've spoken to people who say "no" - because of course he must have known what the reaction was likely to be - and so he should know better. They feel that RG knew exactly what it would do for his career.
For what it's worth, I think RG's attempt at humour is a bit tragic because he's trying to be down with the kids (no relation to this column). I heard the word 'mong' used in the office about six years ago, with the same defence used by RG, when an eyebrow was raised. It could be that he's being 'very 2006'. Is RG a man out-of-time?
I didn't have a child with DS when I was doing comedy but I'm sure that I never stooped onto this territory. On the other hand, I want comedy that challenges. That's why that Family Guy storyline was so brilliant. And although I see what Ricky is trying to do, I'm just left thinking that, instead of being this great, cutting edge comedian, he's ended up looking a bit sad.
at November 07, 2011